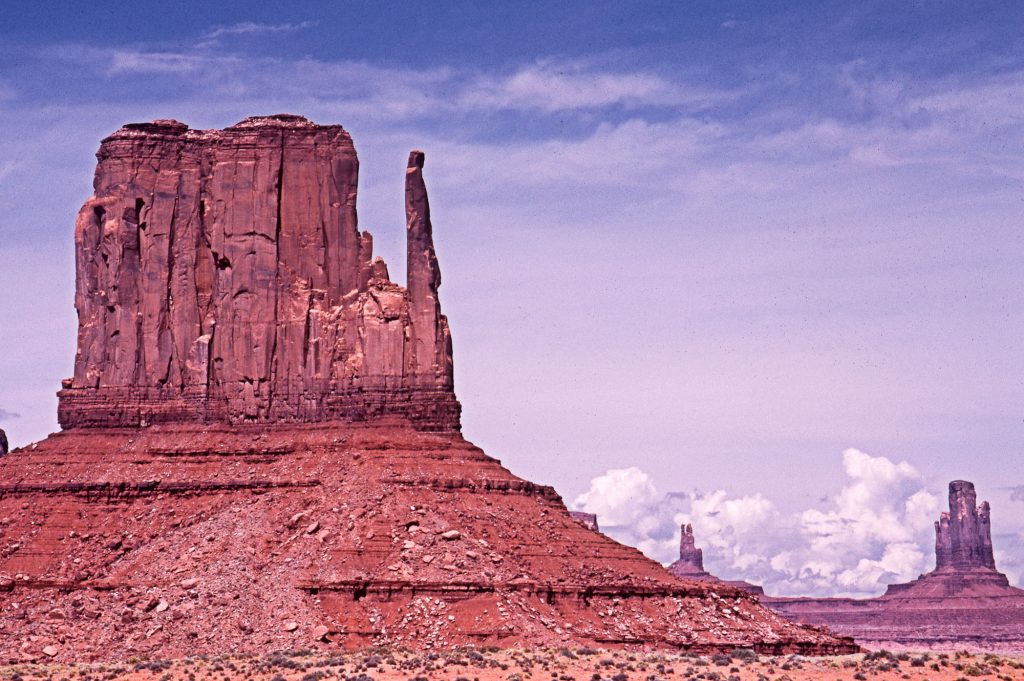 When I finished up my graduate studies in 1982, I had large bills, little money, and big ideas. While studying at the University of Michigan, I’d made a friend in another grad student, a Navajo from the reservation in Northern Arizona. Paul Willeto graduated a year ahead of me, and had returned to Navajo Land to teach at Navajo Community College (now known as Dine’ College.) Out of the blue, Paul called me and suggested I apply to teach the welding trades program at NCC; the program was closing, simply because no teachers would apply. The location was remote, deep in the heart of the Navajo Reservation, the job paid poorly, and the program was disorganized.It all sounded great to me. I’d never been further west than Michigan, Arizona seemed inviting, and I wasn’t ready to go back to New England, so I applied and got hired over the telephone. Really, I was clueless about what to expect, but the school, set at the foot of the Chuska Mountains in the Southern Rockies, was intriguing, and the mission congruent with my liberal outlook on things. I figured, what the hell, it’s a job, a goal, and an adventure.

So, in early August, I packed up what little I owned in my old Chevy pickup, said goodbye to Ann Arbor, and set off for Indian Country. I drove west on I-80 across Illinois and Iowa, camped in a rest area in Nebraska, then drove to Laramie, Wyoming, where I stayed with friends. Next day, I headed south into Colorado. I developed brake problems on the long, steep incline into Steamboat Springs, and had to use a runaway truck turnout to avoid total disaster. I limped into Steamboat, got a room, and used a metal file to clear the glaze off my brake pads.

That seemed to help, so the next day, I headed out to Craig, and then turned south to Rifle, Colorado. On a mountain road near Rifle, I came around a corner and almost hit some cattle in the road; the bull had a huge set of horns, and almost gored the Chevy as I passed through the herd. I camped for the night somewhere in Grand Mesa National Forest, beside a high alpine lake.

Next day, I drove through Delta and Montrose. Near Montrose, I came through a beautiful ranch area, where I saw a big herd of bison. Excited, I pulled over, grabbed the camera and walked to the edge of the range, which was enclosed by a tall wire fence. To steady myself while shooting a photo, I leaned on the fence. Next thing I new, I was sitting on the ground, dazed; that’s how I learned to be careful about electric fencing. It was like getting hit by a bat. Bison are barely domesticated animals, and will just knock down regular cow fencing to get at fresh grass, so high voltage is necessary if they’re to be contained. Chastened and edified, I drove on.

Looking south, the San Juan Mountains of southwestern Colorado loomed ahead. Buried deep in a mountain valley, Ouray, Colorado, is the essential Rocky Mountain town, a hub for backcountry fun. It’s a great jumping off point for alpine backpackers, fly-fishermen, the motoring public, and ‘tourons’ of every kind. I stopped outside Ouray and stayed in a campground. The night I was there coincided with the annual summer run of the ‘Jeep Owners of America’. They’d arrived with RV’s, ‘toybox’-style trailers, ATV’s, kids, dogs, and all very friendly. I bunked down in bivy sack and sleeping bag on a foam mat, amongst all kinds of heavy machinery, and worried all night that I might get run over.

Ouray is also the northern terminus of a spectacular mountain highway, US 550, called the “Million Dollar Highway’, because it had cost one million dollars a mile to construct during the 1920’s. The road clings to the western side of the Uncompaghre Gorge, with steep drop offs into the canyon. The 25 miles of the highway go over three separate mountain passes, past some of Colorado’s greatest mountains: Engineer, Kendall, Red Mountain, Sultan, and Storm Peak. It was a thrilling ride, but I drove white-knuckled, in my overloaded truck with questionable brakes, and I pulled over in the few places available to rest both truck and driver.

I arrived in Durango mid-afternoon and stopped for dinner, after which I took a little walk downtown. (I spent a lot of time in Durango in the following years, and lived there for awhile.) No rooms were available in town, so I drove west and found great camping along the La Plata River, near Hesperus. Next day, I drove into beautiful Cortez, Colorado, then south on old Route 666.

South of Cortez, I hit the Four Corners region, where the green, mountainous Colorado Rockies give way to the arid red rock canyon lands and high desert of Northern Arizona. As I drove through this vast empty vista, down into the San Juan River valley, I passed natural gas fields, with pipes running everywhere, and fields of oil derricks bobbing away in the distance. I arrived at Teec Nos Pos, situated at the foot of the mountains; I’d arrived in Navajoland. Heading west, I drove to Mexican Water, Arizona, then south.

Along the road, occasional small Navajo villages could be spotted way out in some vast valley, or at the foot of some towering red sandstone cliffs, always small clusters of round mud-walled ‘hogons’, the Navajo building style. I passed Ranchers on horseback and Navajo kids on ATV’s, herding sheep and goats. Once in awhile, a truck would pass by going the other way, stuffed full of Navajos, kids, grandmothers in back, a sheep or goat. The road wound through amazing sandstone canyons, tall spires of rock that stuck straight up out of the valley floor. It was both spectacular and bleak, and for the first time, I had some misgivings about my whole endeavor. I passed through Many Farms, a hardscrabble place, and arrived in Chinle, a dusty little town, very poor, with a lot of BIA housing and livestock operations. It was hot.

While taking a break in the parking lot of a supermarket in Chinle, I got my first look at the Dine’ (‘The People’). Nearly everyone was dressed western style, the men wearing boots and big ol’ 20 gallon hats, the women in velour broomstick skirts and kerchiefs. Everyone was decked out in turquoise jewelry, even the little kids. During my mid-day stop in Chinle, it was so hot, so poor, and so foreign, that I was a little intimidated. I looked over the map to see just how far it was to southern California; I figured I could be there in about twenty hours of driving. The day after tomorrow, I thought, I can be in San Diego, on the beach.

So, as I drove east, along the edge of Canyon de Chelly, my resolve was a little shaky, and I figured I’d go drive around the college, check it out, and if it was anything like Many Farms or Chinle, well, I’d just keep rolling right out of there, and head to the West Coast, and become a surfer, or a hippie. The road climbed out of the Chinle Valley, up towards the Chuska Mountains, and the land got lusher, the Navajo ranches more beautiful, the air cooler, until, near Tsaile and the school, classic Arizona pine forests appeared. Navajo girls in traditional dress herded sheep, six kids rode by on one horse, then I saw the sign for Navajo Community College, and turned in. The main road around the college is a perfect circle, and all the buildings circular, this geometry being in keeping with Navajo metaphysical concepts. It was beautiful, a lovely campus at the foot of the Chuskas, in a ponderosa pine forest. I drove to the administration building, parked, and walked in. And, I stayed.